As a relative newcomer to From Software’s punishing creations, I committed what Soul’s and Bloodborne fans consider a cardinal sin: I pointed out that for all its merits, Bloodborne has some serious flaws. I foolishly went over to the Bloodborne Facebook page to post a short comment about the lack of pre-boss fight checkpoints. Those who have gamed on any level are familiar with the long-standing convention of offering players an autosave before a big fight. I mentioned, that it would have been helpful to have lanterns (the save points in Bloodborne) in a few more locations. At present they are few and far between, located only after boss fights and then at the start of new areas, which are directly after any confrontation with a major foe. In short, two lamp posts are usually cramped close together followed by a lot of enemy infested space without a save point in sight. To me, as well as other gamers and reviewers, this seemed like a poor design choice. 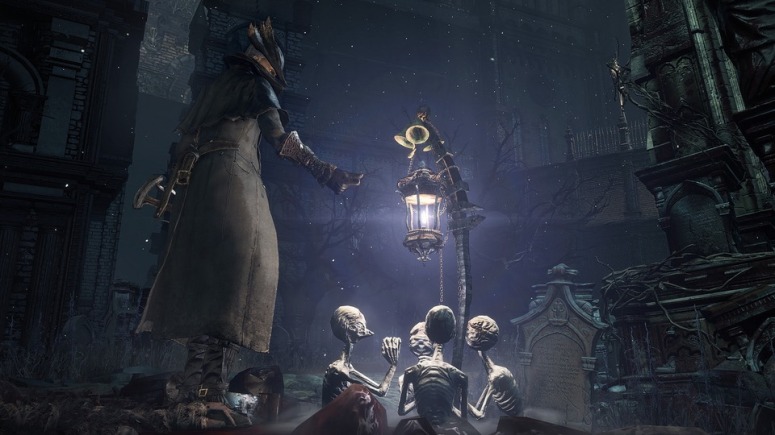 The reaction was swift. Someone, who I’m sure meant to be helpful, told me to unlock shortcuts (which I already had) and concluded with the following bizarre remark: “don’t blame the game just because you aren’t playing it right.” This is possibly one of the most ridiculous comments I have ever heard regarding a game, but from reading more about the fanboys and fangirls that rave about Hidetaka Miyazaki and his uber-challenging games, this is a common logic among cadres of so-called “hardcore” gamers.

The idea that there are “right” ways to play and “wrong” ways to play is like suggesting there are correct and incorrect ways to enjoy or provide constructive criticism on books, films and other media. We don’t tell people who find House of Cards melodramatic or those who see Game of Thrones as too convoluted because of the many, many characters that enter and exit that they aren’t watching these shows right. We acknowledge that for those individuals any positive meaning or experience they derive from viewing is outweighed by their concerns and issues with the program. This is entirely reasonable and a basic principle of free speech. Intelligent people can disagree.

Unless that is, you disagree with hardcore gamers. This self-identified sub-group of gamers often claim to adhere to libertarian or untrammelled free-speech principles as a defence for their abusive behaviour towards the presence and representation of women, minorities and LGBTQ+ individuals in the gaming community. Hardcore gamers are often a bizarre mix of cryptofascist values and anti-state rhetoric. In their world, freedom of speech is a zero-sum game. For them to enjoy freedom of speech, so their logic goes, all dissenters must have their’s limited, including core and “filthy casual” gamers.  If this sounds like the same logic used by the alt-right or Trump’s immoral majority, its because it is. Welcome to the culture wars v. 2.0; a war whose early battles were fought online.

So aside from being patronizing and annoying, comments about how to play a game right, their hype machine and its response to criticism also reveal something rotten at the core of hardcore gaming’s subculture. Many of the issues become strikingly clear when we consider the major flaws in what is an important, but ultimately mediocre, game.

Narrative With No Gaming, Gaming with No Narrative

Certain segments of the hardcore gaming population have been vocal about what they refer to as “non-games”. By this term, critics are referring to narrative-driven interactive experiences like Gone Home. While these kinds of games can be rich, engaging and interesting experiences, their lack of death, combat, or a male protagonist qualify them as not really games in the minds of some. Additionally, they often deal with complex socio-emotional issues like coming out, love, abandonment and intolerance.

In fact, these most certainly are games, WASP male protagonist or not. The player controls a character and interacts with the world. It is, however, on the extreme end of the spectrum between narrative-driven and gameplay-driven video game experiences. It is this very tension which game criticism has dubbed ludo-narrative dissonance. In short, ludo-narrative dissonance describes the tension inherent between interactive gameplay (ludo) and attempts to tell a story (narrative). The Grand Theft Auto Series and other sandbox games are some of the more clear examples where players can behave in ways that undermine attempts to tell a story and thereby fall out of the game’s supposedly immersive world. Instead, they allow the violent gameplay to transport them uncritically into a violent world and helps them to absorb messages that run counter to the story. You can read the post that started this discussion by game designer Clint Hocking here.

When games are done right designers try and use gameplay and narrative to reinforce one another. This tension between play and story can help to generate brilliant experiences. The Last of Us stands out as a game which provided meaningful gameplay decisions that worked with the narrative to create a fabulously rich experience. The self-interest of gameplay is ultimately reflected in the narrative and vice versa.

While Bloodborne and Gone Home are both enjoyable and interesting games, both try to do an end-run around the problem by minimizing either narrative elements or gameplay elements. Rather than making them great, this frightened retreat from the major tension of contemporary game design shows the weakness of both games, and in the case of Bloodborne a disturbing politics of hate and intolerance that underlies the retreat from narrative.

Indeed, when one of the few articles about story describes Bloodborne’s and other Miyazaki games’ stories as “vague and bizarre” it raises serious questions about the quality of the game. Gone Home tells an interesting story that unfortunately does little more than bring the player along for the ride. Bloodborne has the opposite problem: engaging gameplay that is fundamentally meaningless because of a convoluted and empty narrative. Certainly Bloodborne has things to say about the futility of existence, the absurdity of life and other existential issues, but it doesn’t explore these subjects enough to even develop them into themes. It is like a version of Beckett’s Waiting For Godot where Vladimir and Estragon repeatedly hang themselves from the tree – over and over again until death loses all meaning in a Sisyphean blood-orgy. Thus, Ben Kuchera’s attempt to suggest that Bloodborne is about mindfulness, while an appealing defence of the game on the surface, only highlights with extreme clarity this games major shortcoming. Mindfulness becomes the only coherent subject to be pulled from this lengthy game. Furthermore, when we consider the lack of a meaningful narrative that helped to enrich gameplay was one of the main reasons for Destiny’s well-deserved mediocre ratings, it is clear that Bloodborne may be an enjoyable game, but is not a great game. It also seems to have been given a free-ride by the mainstay of the critical establishment. It wants players to be challenged, but as if it were a mirror image of Gone Home, opts for the conservative design choice of pretending narrative doesn’t really matter to games. And this suits hardcore gamers just fine. The absence of a meaningful narrative means Bloodborne doesn’t require them to think about games critically, you know, as if how they represent the world really matters. If, as many in the hardcore community suggest, Gone Home doesn’t count as a real game, then neither does Bloodborne. For the record, I think both count as games, but neither deserves the praise they have received.

What’s With All the Praise?

Why then does another good (but not great) game receive such stellar scores from reviewers? This is partly a product of the political economy of gaming and game reviews at the moment; however, it is also about the (mostly ugly) identity politics being played by the hardcore gaming community. Dave Thier’s excellent article for Forbes highlights both of these issues. On the one hand, Bloodborne seems better than it is because the vast majority of PS4 and XBOX One games have been so aggressively mediocre since the consoles’ releases that the Wii U is threatening to make a comeback from the edge of oblivion. Self-described hardcore elements within the gaming community are troubled by this, as it implies that “serious” games are failing a wide majority of players. Hardcore gamers desperately needed a hit AAA game, and so have latched on to the first, half-waydecentt game published for core- and hardcore- friendly consoles. When coupled with the fact that most of the reviews were written by so-called “experts” (read fanboys) of Miyazaki games, inflated praise was, at least in part, to be expected.

Yet, the praise also reveals something about the culture of game journalism and its intersection with hardcore gamer identity. What hardcore gamers (of which many journalists may number themselves) love most about Bloodborne is its inaccessibility. This is where comments, like the one that started this post, come from. Like a film buff who only watches experimental art-house flicks so they can ridicule those who prefer less abstruse media texts, Bloodborne players like that most people will hate the game and give up quickly. It reinforces their own notions of a division between hardcore and casual gamers that helps them to claim special authority and expertise, which helps, in their minds, to justify their lopsided version of freedom of speech.

It allows them to dismiss voices that offer alternative and less naive thoughts on the world of video games. What is perhaps most interesting is the way the punishing gameplay of Bloodborne and the Soul’s games feed into very old ideas about masculinity that are central to hardcore gamer’s sense of identity. Specifically, the mostly male reviewers have hit upon the satisfaction one feels, after repeated deaths, of beating a foe. This is the same kind of valourization of sacrifice and machismo that is part-and-parcel of the honour ethic of identity. Bloodborne is not alone in this. Rather unsurprisingly, many core and hardcore games, especially those given the inflated title of e-sports, draw on these same notions. The implication is that hardcore gaming and love of hardcore games is evidence of real masculinity and casual gaming, is by extension, synonymous with femininity or male effeteness.

Consequently, the confluence of the current political economy in gaming, as well as the male-centric category of hardcore gaming, has created an environment where a good, but not great, video game can become a candidate for game of the year. The reality, however, is that this has nothing to do with From Software’s recent creation, which is plagued by poor design choices and a superficial narrative, and everything to do with the culture war ongoing at the heart of the gaming community and beyond between “hardcore” gamers and the rest of us with enough basic intelligence to recognize that things in the virtual world also matter in the real world. Nothing, not even Bloodborne, is just a game. Everything, to borrow from Cory Doctorow, happens in real life